String theory is the most promising theory that unifies all particles and forces in nature, including gravity, in a way consistent with the laws of quantum mechanics and relativity. String theory answers fundamental questions about the symmetries of nature, the quantum behavior of black holes, the existence and breaking of supersymmetry, and the quantum treatment of singularities. In string theory all the forces and particles emerge in an elegant geometrical way, realizing Einstein's ultimate dream of building everything from the geometry of space-time.

Modern-day string theory focuses on a very broad range of subjects, many of which are in one way or another related to the concept of holography. Holography is an example of a duality, which is a relation between two different theories that turn out to describe the same physical system as though they were two different sides of the same coin. The reason why we use the word `holography' is that one theory is defined in one dimension higher than the other, in the same way that a hologram is a three-dimensional image that is generated by a flat two-dimensional surface. A holographic duality relates two vastly different theories; it translates a (quantum) theory of gravity to an ordinary quantum field theory. The dual quantum field theory is `ordinary' in the sense that it doesn't involve gravity, which means that we know, at least conceptually,  how to compute physical quantities. Each theoretical description of a physical system has its limitations. That is, each theory has its own range of applicability, outside of which the theoretical predictions become unreliable.  The power of a holographic duality lies in the fact that the regime where one of the two dual theories becomes unreliable is precisely the point the the other becomes reliable again, and vice versa. The Amterdam String Theory Group is well-known for its important contributions to this fascinating subject.

The String Theory Group is jointly supported by the Institute for Theoretical Physics and the Korteweg-de Vries Institute for Mathematics of the Faculty of Science.

There is also a close cooperation with other research groups in The Netherlands via the joint Delta Institute for Theoretical Physics. 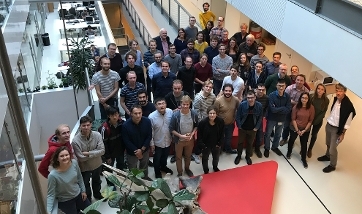